George Boole was one of the nineteenth century’s great thinkers, a genius, Professor of Mathematics and humanitarian. As the inventor of Boolean logic – the basis of the modern computer – he is regarded as one of the founders of digital electronics.

He was born in Lincoln, England on 2 November 1815, the first of four children to John and Mary Ann Boole. 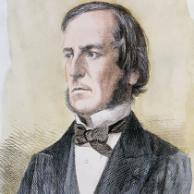 In 1831, John Boole’s precarious shoemaking business foundered and George, aged only 16, found himself the main provider for his family. Abandoning thoughts of becoming a clergyman, he took work as an assistant teacher, first in Doncaster and then Liverpool, moving in 1833 to Hall’s Academy at Waddington, near Lincoln.  Recognizing that an assistant teacher’s salary could not provide adequately for his family, he took the courageous step and opened his own ‘Boarding School for Young Gentlemen’ in 1840 which was located at no 3, Potter Gate, Lincoln.  In 1849, Boole left Lincoln for Cork, Ireland when he took up the role of Professor of Mathematics in Queen’s College Cork  (now known as University College Cork [UCC] - Boole’s academic home). 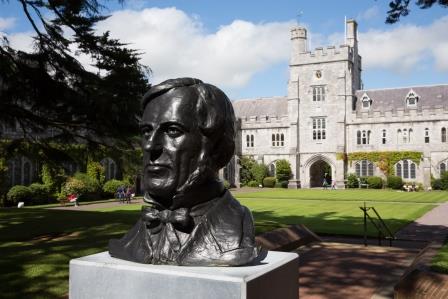 “We are so proud of our colleague George Boole. He was an independent thinker in our true UCC spirit, whose creative and ambitious intellectual leaps into the future have made the world a better place for all of us.” - Professor Patrick O’Shea, UCC President

The IGNITE Programme helps passionate young entrepreneurs to create sustainable, scalable businesses that add value by developing innovative products and services and creating jobs and investment opportunities. Based at UCC, the programme is open to recent graduates of any third level institution in any discipline.

One such company, born from this innovative programme is: QuickMinutes.com. Based in UCC Western Gateway Building the QuickMinutes.com team embodies the critical thinking and entrepreneurial spirit of George Boole, as they tackle the issue of governance of official meeting documentation in this data driven society/age.

At the core of their value proposition is a web application which facilitates paperless meetings, streamlined administration and a governance system underpinned by blockchain technology. Never before has such a powerful governance tool been so simply implemented, ensuring ease of use for both the recorder and the validator.  The QuickMinutes ‘Sign & Seal’ feature enables any user to harness the immutable power of the blockchain in a few simple clicks, ensuring the integrity of their documentation forever. QuickMinutes has quickly expanded its clientele to include some large public sector organisations; Cork County Council, UCC and NUIG.

“We store the data in such a way that only people with access to the meeting pack can cross reference and validate it. This ensures privacy and security for all our users and makes it easy for them to ascertain whether the integrity of a document is ‘True’ or ‘False’.” - Martin Bullman, CTO of QuickMinutes.com

As QuickMinutes looks to the future they can’t help but be inspired by the past, in true Boolean tradition they are pushing the algebraic/algorithmic boundaries of computer logic and do not show any sign of stopping. For them, much like many of the great minds forged in the wake of Boole’s methodology, the true measure of innovation lies not in its complexity but in its application.

“Each generation as it passes away bequeaths to its successor not only its material works in stone and marble, in brass and iron, but also the truths which it has won, and the ideas which it has learned to conceive; its art, literature, science, and, to some extent, its spirit and morality.” - George Boole, First Professor of Mathematics, UCC