Through the George Boole Papers  held in UCC Library , we get a great insight into life of an academic living in Cork in the nineteenth century. Boole was obviously a considerate family man and wrote frequently to his family in Lincoln as the collection of his personal papers show. On 17th March 1851, the feast day of St. Patrick (patron saint of Ireland), he writes to his sister Mary Ann and sympathises with her on her recent ill health.  As is the Irish condition, he speaks about the weather and how it might interfere with his plans for the day. 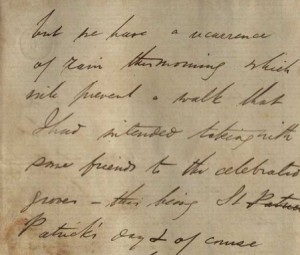 “..we have a recurrence of rain this morning which will prevent a walk that I had intended taking with some friends to the celebrated groves – this being St. Patrick’s day…”.  Extract from Letter BP/1/61 George Boole Papers, UCC Library

Luckily by the time he has finished writing, the rain has cleared up and he concludes that he “might get to Blarney” after all.

Boole mentions meeting a parade of sorts on the night before St. Patrick’s Day but regrets to say that the noisy participants who were “blowing trumpets and bullocks horns” appeared to be drunk.  Traditionally, St. Patrick’s Day was a break from the Lenten fast when abstinence from alcohol could be broken and when it was customary to over-indulge. Boole witnesses this overindulgence which is in contrast to the ethos of the Temperance movement who were active from the early nineteenth century in Ireland. The Temperance movement promoted moderation and indeed total abstinence from drinking alcohol.  The justification for the overindulgence by the revellers Boole sees is given from a song “St Patrick was a Gentleman”.  Boole attempts to give the opening lines for the song but also inserts the disclaimer “I won’t pledge myself for the accuracy of the quotation” and neither will we.

St. Patrick’s Day is the main Spring festival in Ireland and the arrival of spring is heralded by Boole in this same letter to Mary Ann. He is arranging to send some shamrock to Mary Ann and has also included some yellow flowers from the furze (gorse) so that she can notice the “peculiar odour” of the flowers. The flowers have a distinctive coconut scent and coconut presumably was not widespread or well known in nineteenth century Ireland. His scientific skills are to the fore as he observes the timing of the natural events of spring. On 17th March 1851, the primrose is flowering and “in a short time the lanes called boreens will be full of them” but he notes that “The large trees are not yet in leaf”. So bud burst and first leafing, key spring events do not yet seem to have happened.

To read more about this letter and others from the archive, visit The Papers of George Boole