The Poetry of George Boole

The purpose of this little book is twofold. First, and most importantly, it is to collect and preserve the seventy or so surviving poems written by the mathematician and logician George Boole (1815-1864) and to comment upon what light his poetry throws on his character and personality.

Second, it is to discuss a much-neglected topic, the interaction between Science and the Arts, with particular reference to mathematics and poetry.

Poetry clearly meant a great deal to George Boole, both to read and compose. From his early teens until about 1855, he used poetry as a form of recreational activity, possibly as a form of relaxation from his more serious work in logic and mathematics. He was a competent, if not exceptional, translator and versifier, who now and then wrote lines of real poetic merit. And in the debate about reciprocal contributions by artists to the sciences, it would be difficult to find even a single established poet who made even a minor contribution to mathematics. 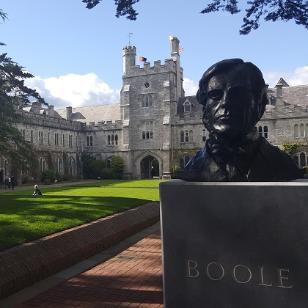 Desmond MacHale was born in Castlebar, Co Mayo, Ireland. He holds B.Sc. and M.Sc. degrees in Mathematical Science from University College Galway and a Ph.D. degree in Algebra from the University of Keele in the UK. He is Emeritus Professor of Mathematics at University College Cork, where he taught for forty years. He is author of over sixty published books on such diverse topics as Lateral Thinking Puzzles (with Paul Sloane), Wit, Jokes, Puzzles, George Boole, John Ford’s movie The Quiet Man, and giving up smoking. Among his interests are Geology (in which he has a diploma), photography, broadcasting, book collecting, recreational mathematics, humour, family history, and puzzles of all kinds. He and his long-suffering wife Anne have five wonderful children and three even more wonderful grandchildren and live in Cork.

To purchase, please click link The Poetry of George Boole

Other Books on George Boole by  the same author include: