In what is shaping up to be a fierce competition, six novice debaters will battle it out for the coveted prize.

The competition is a long-running collaboration between the UCC Law Society and the UCC Philosophical Society. Both societies’ run a speaker development programme which from the start of the College year seeks to take in and foster new debating talent. While many of the finalists over the years have been former schools debaters, each year a number of the speakers make it to the final having never taken part in competitive debating before demonstrating the success of the development programme. This year the competition partnered up with the George Boole 200 celebrations and in honour George Boole rebranded itself the George Boole Maiden Speakers Competition.

Gary Moloney, Vice-Auditor of the Law Society and organiser of the competition, noted that the competition has been a phenomenal success this year. The competition allows students to develop their public speaking and critical thinking skills. It also increases their confidence and broadens their perspective. “Too often, we see the world and just accept it as it is. We don’t challenge norms and we don’t question authority. Debating provides students with the skills necessary to truly engage with some of the most difficult issues our society faces.”

The motion for the final will be “This House believes that Religions should be held Responsible for the Crimes of their Members”, a motion which will challenge the competitors assumptions and force them to confront difficult philosophical questions. The Chief Adjudicator for this year’s competition was Ms. Lucy Jones.  Lucy is a final year law student with a keen interest in international law. In 2014 Lucy founded “Know Offence”, a campaign which aspires to help students affected by sexual violence. Lucy loves to debate. She served on the committee of the Philosophical Society and has represented her society internationally. She is currently an oralist on UCC’s Philip C. Jessup International Law Moot Court team and will represent Ireland at the International Rounds in April. Lucy’s job as Chief Adjudicator was to ensure that each round had a number of experienced and respected judges overseeing them along with setting the motions for discussion.

The final will take place at 7pm in the Council Chambers on March 11th and all are welcome. For further information please see out facebook page. 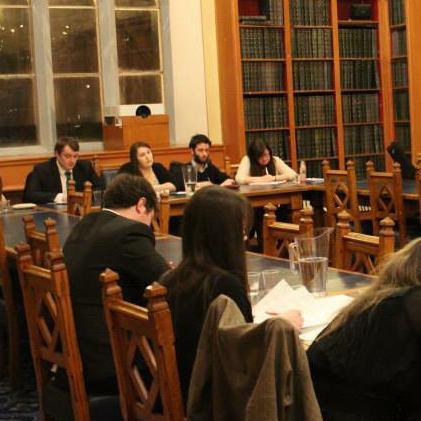