Gwen Boyle discovers how the influence of the mathematician comes full circle, as his concepts are introduced in a fun and interactive way to the classroom

This November, in a rather amazing feat of time travel and bi-location, George Boole will simultaneously appear in classrooms across Ireland and the world – or at least, his work and his legacy will. On George Boole Day, Monday, 2 November 2015, schoolchildren will have the opportunity to take part in fun and interactive lessons that are specially designed to introduce young thinkers and innovators to concepts pioneered by the mathematician.

"It shows that if you put your head down and work hard enough, you can achieve anything you set your mind to."

The project, called Boole2School, is being led by UCC staff and is part of the George Boole 200 programme of outreach activities. Children in Ireland, China, India, Vietnam and North America will take part in the day, due to the work of UCC’s partner universities.

Kathy Bunney, Project Support Officer for George Boole 200, explains that the lessons, which will be freely available online for teachers, have a historical as well as a mathematical aspect. Children will learn a little about Boole’s life and times, including the fact that he was self-taught; as Kathy notes, “It shows that if you put your head down and work hard enough, you can achieve anything you set your mind to.”

Age-appropriate maths lessons, designed to suit children from 8 to 18, involve puzzles and activities that apply concepts from probability theory to Boolean algebra. Some are based on popular games, including Minecraft and Pacman. “It’s introducing a new type of maths into the classroom, and it’s slightly off-piste from their curriculum – the kids are not only learning mathematics, but logical thinking,” says Kathy. “A lot of the puzzles follow the game style of Cluedo: using detective work to eliminate people and figure out the one true solution. That type of logical thinking is something that will help them in many different subjects, not just mathematics.”

The lessons were developed by volunteer teachers involved in Maths Circles Ireland, a collection of extra-curricular clubs that nurture children’s love of and talent for maths through activities, puzzles and games. The success of the Maths Circles model in Ireland is due to the work of many collaborators, but has its roots in the endeavours of Anca Mustata, a lecturer in UCC’s School of Mathematical Sciences who imported the concept from her native Romania.

Anca describes the undergraduate and postgraduate students who teach in Maths Circles as the “engine” of the project to bring Boole into schools in November. Their lesson plans will make life easier for teachers, who can download and print lessons to bring into classrooms on the day. Anca hopes that “teachers will take the lesson plans and run with them”, and find them a “handy, fun, meaningful and almost effortless way of celebrating George Boole together with their pupils”, teaching them to children in the future, in a process that will grow organically.

"We want to show schoolchildren and students that maths can be fun and interesting."

Áine McCarthy, Programme Manager for George Boole 200, believes that the project should leave a legacy after November and emphasises the collaborative nature of the initiative. Cork Education Support Centre’s Boole Project Director Ruairí Ó Céilleachair is working closely with Áine on behalf of the Association of Teachers’ Education Centres in Ireland (ATECI) to ensure that George Boole Day will reach far beyond the university where Boole pioneered his work. Gillian Bergin, Elaine Beare and Les Gosnell from global multinational EMC are also supporting the project and adding a tech-industry dimension to the initiative.

This collaborative spirit extends to the lessons, which are non-competitive. “We want to show schoolchildren and students that maths can be fun and interesting,” says Áine. “Our aim for the project is to have as many schools, classes and students involved as possible on Monday, 2 November 2015.” Classes that take part in George Boole Day will receive participation certificates that can be printed and completed for each child. 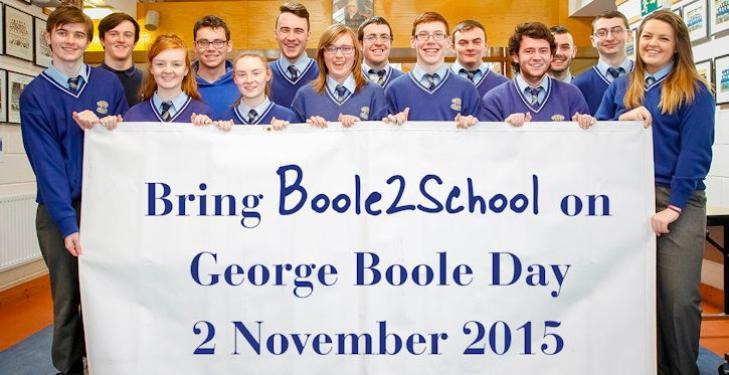 The students of Gaelcholáiste Mhuire, an Mhainistir Thuaidh, Corcaigh will be taking part in Boole2School on November 2, 2015

The Boole2School project will be launched in September 2015. The organisers would like to hear from anyone who is interested in getting involved in the project, including teachers and parents.

Teachers will shortly be able to register their classes for George Boole Day on www.georgeboole.com/boole2school
Anyone who wishes to get involved can find out more by emailing georgeboole200@ucc.ie.