The Academic Home of George Boole Celebrates Another Milestone Anniversary

The academic home of George Boole, University College Cork (UCC) in Ireland,  celebrated its 175th anniversary on December 30; on that date, in 1845 the university formally came into being as Queen's College Cork (QCC).

QCC was founded as one of three Queen’s Colleges located in Belfast, Cork, and Galway, under an Act “to enable her Majesty” – Queen Victoria – “to endow Colleges for the Advancement of Learning in Ireland".

George Boole and the first female Professor in Ireland

From 115 students in 1849, UCC has grown to over 21,000 students today.  UCC has had many firsts in its long history, including Mary Ryan who in 1910 was appointed the first female professor in Ireland.

Moreover, UCC's first Professor of Mathematics was George Boole, the founder of Boolean algebra who was appointed in 1849 and is recognised as one of the forefathers of the digital age.

UCC Photo: An Investigation of the Laws of Thought by George Boole

Throughout its history, UCC and its students have been a force for positive change. The scientific research of Edwin J Butler (Medicine, 1898) helped improve farming and alleviate famine in India. After World War Two, UCC welcomed Polish refugees exiled by war as its first international students, and greatly expanded access to higher education to adults, people with disabilities, and those from under-represented backgrounds.

Removing barriers and extending opportunities through education have always been core objectives for UCC.

Over the last 175 years, with the support of governments and philanthropists, UCC has developed a strong and distinct cultural identity, including the historic Quadrangle, Aula Maxima, and Honan Chapel, to more recent architectural gems such as the Glucksman Gallery.

From its establishment, UCC has been recognised as producing quality research at the highest international levels. The work of original thinkers like George Boole, Mary Ryan, Daniel Corkery and Seán Ó Riada continues to resonate into modern times and UCC’s research in food and health, photonics, sustainability, and perinatal medicine continues to be recognised as world-leading.

UCC has a proud tradition in pushing the boundaries of research and innovation, creating significant impact in the community beyond the institution – from the very early days when George Boole created his famous Laws of Thought to the present day when, annually, over €100m is invested in ground-breaking research across multiple disciplines, over 2,000 research articles are published, and where are our research community collaborates with over 4,000 institutions from across the world.

Furthermore, our foresight saw UCC establish the ninth website in the world in 1991 - the first in Ireland.

Moreover, UCC is proud to have been the first university in the world to be awarded a Green Flag by the Foundation for Scientific Education in 2010, for environmental sustainability. This year, its wonderful collection of over 2,500 trees across its 42 acre campus has been awarded global accreditation by the prestigious ArbNet body.

The lifeblood of our University, our students continue to inspire with their energy, creativity, commitment, and compassion. UCC students participate in over 100 societies, covering interests such as politics, society, charity, the arts, science, gaming and more. 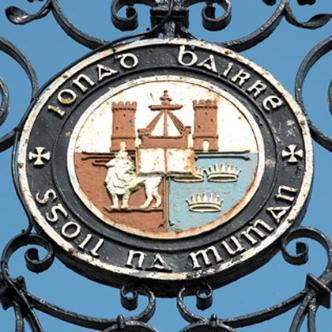 UCC Reconnects with its 175-Year History

In Spring 2021, Interim President John O'Halloran will host an event on the Quad to mark UCC 175, with involvement of both Quercus and Access student representatives from each of the four Colleges of the University, celebrating our history, our diversity, and our shared ambition.

Commenting on the events for this year, Prof O'Halloran said:

"It is most appropriate that we mark UCC 175 with our Quercus and Access students on the Quad. Our limestone Quad, designed by Deane and Woodward, is modelled on Christ Church of University of Oxford, and the Quad itself continues to represent the heart of our University, while the reach of our engagement and impact is now global. Our Quercus and Access students represent the essence of how our students and staff at UCC continue to challenge the norms and push boundaries in addressing societal grand challenges."

This event will be organised in strict compliance with public health rules and guidance. .

Other UCC 175 events and activities will be announced later in the current academic year, via UCC website and social media channels.