The Voynich Manuscript is one of the world’s most mysterious books written in code. The manuscript gets its name from Wilfred Michail Voynich (1865-1930), George Boole’s son-in-law.

Several attempts by world class codebreakers (including Alan Turing) have failed to definitively unravel its meanings.  Written in an unknown code, this early fifteenth-century Italian volume, has been described as:

‘the longest, the best known, the most tantalising, the most heavily attacked, the most resistant and the most expensive of all cryptograms.’

However, a new theory has recently emerged from University of Bristol which may change all that.  Research Associate, Dr Gerard Cheshire argues in a recent peer-reviewed journal ‘Romance Studies’  (and outlined in an online article from ‘The Guardian’ - 16 May 2019) the manuscript is:

‘a type of therapeutic reference book composed by nuns for Maria of Castile, Queen of Aragon, in a lost language known as “proto-Romance”.’

Dr Cheshire claims, amid much scepticism, that the Voynich manuscript is

‘a compendium of information on herbal remedies, therapeutic bathing and astrological readings’ which focuses on female physical and mental health, reproduction and parenting.

Its namesake, Wilfred Michail Voynich was born Wilfred Michal Habdank-Wojnicz in 1865 in Telsze, Lithuania. He was part of a noble Polish family.  After school in Suwalki, a town in north-eastern Poland, he studied at the universities of Warsaw, St Petersburg and Moscow. He graduated from Moscow University in chemistry and became a licensed pharmacist.  However, a quiet life as a pharmacist was not the one chosen by Wilfred Voynich. At the age of 20 he became a revolutionary, joining Ludwik Warynski’s Proletarjat organisation. The following year, in 1886, he was involved in a failed attempt to free two fellow conspirators who were imprisoned in the Warsaw Citadel. 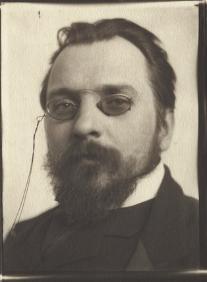 Arrested by the Russian police, Wilfred Voynich was sent to serve penal servitude in Tunka, Siberia. In 1890 he escaped and found his way to Peking. From China he eventually managed to return to Europe, travelling to London, via Hamburg.

In London, Wilfred Voynich founded the 'Society of Friends for a Free Russia' with Sergei Kravchinski (pseudonym Stepniak). In 1895 Stepniak was killed in a railway crossing accident and Voynich ceased his revolutionary activities. In 1898 he changed direction, opening a bookshop in London.

In 1902 he married George Boole’s youngest daughter, Ethel Lilian Boole, who had also been involved in Russian revolutionary activities, before she went on to become a famous novelist. Two years later he became a naturalised British subject and took the name Wilfred Michail Voynich.

Wilfred Voynich travelled to New York in 1914, opened another antiquarian bookshop there, and developed into a world expert in that field. He acquired the Voynich Manuscript in Italy in 1912.

After Wilfred Michail Voynich’s death in New York on 30 March 1930, his wife Ethel Lilian kept the Voynich Manuscript in a safe deposit box for 30 years. Sold in 1960 for $160,000, it is today the property of Yale University.